Here is the full Creative Director's Letter email by Steven, which was posted on the official website. 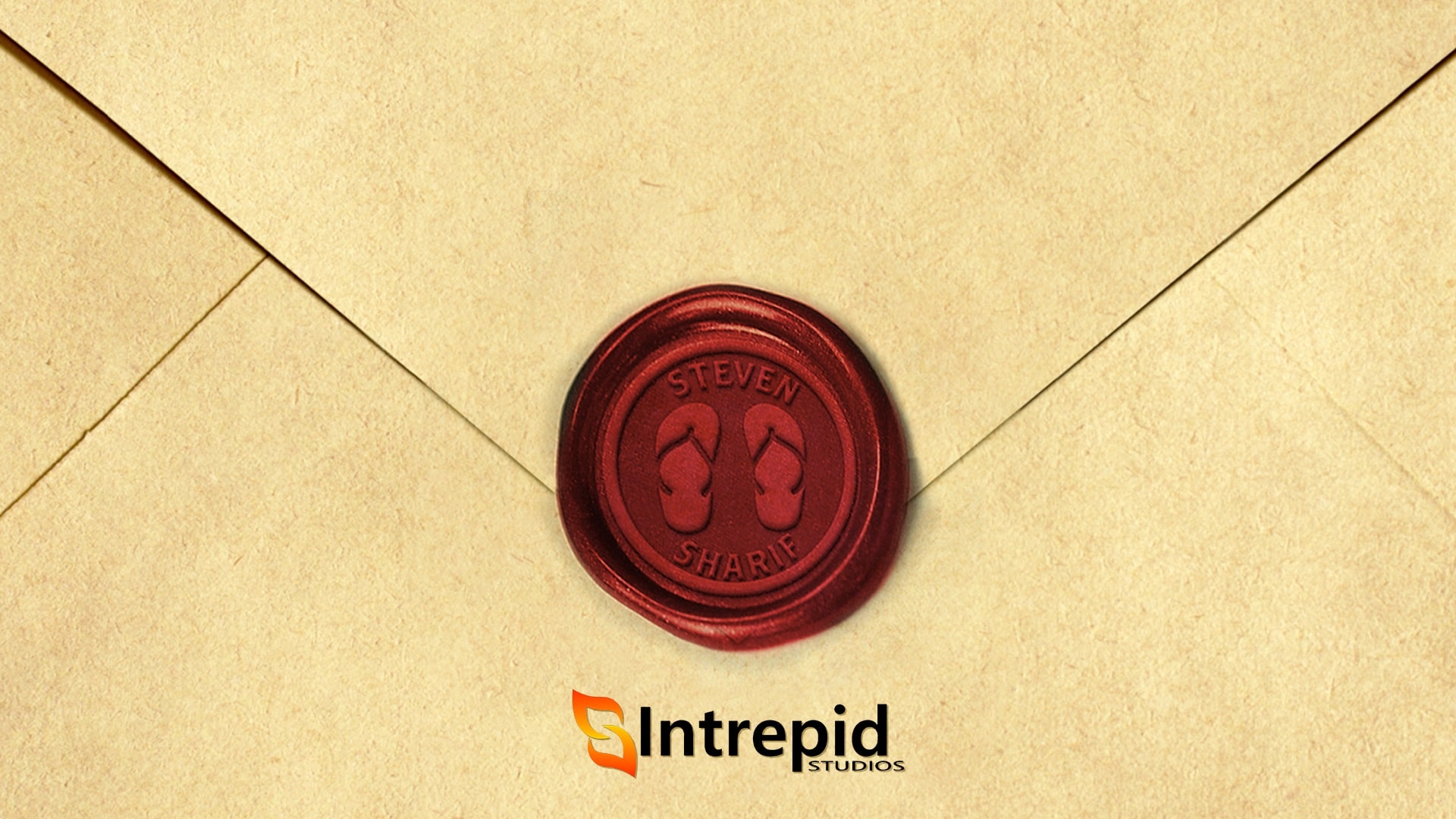 Another quarter has passed, and this was quite an exciting past 3 months. We saw testing in the Alpha One preview commence, released multiple 4K videos, held our first AMA, interviewed with some fun streamers, and continued to see the amazing talent and creations from our Content Creator community.

While 2020 continues to be a challenging year for everyone, the team here at Intrepid has adapted masterfully to our continued work from home policy. I had originally hoped that the status of the pandemic within California would have improved enough by August for us to return to the new studio. Alas, that was not in the cards. As such, I have decided we will be targeting the first quarter of 2021 for the move, of course pending observed progress in the Covid-19 pandemic. Also, earlier this quarter I announced that we will be opening our EU office in Amsterdam to assist in publishing operations for Intrepid in both the EU and CIS regions. This is an exciting new adventure for Intrepid, and we are looking forward to it!

Despite the situation surrounding Covid, our latest hiring round has gone very well! Since July, we have received over a thousand applicants to work at Intrepid, and we have since picked up the most promising candidates to join our Intrepid family. We are still hiring for multiple spots within certain positions, so make sure to keep spreading the word about Intrepid and Ashes of Creation so we can continue to draw the finest talent in the industry!

We have seen some significant progress in the last few months on the project, as you may have seen in the multiple 4K videos we released this quarter. From art to design to engineering, Verra is coming to life.

Characters and the world have seen considerable iterations and improvements over just the past 3 months. We are continuing to develop at a rapid pace and it has been a joy to share these updates with everyone on our monthly live streams.

Recently we moved the project up two engine versions from Unreal 4.23 to Unreal 4.25, while simultaneously continuing iterations on the networking and backend systems with the stress testing that's been underway with our Leader of Men and above backers. Admittedly, there were some challenges faced within the last couple months that our very talented developers have addressed and overcome. Creating an MMORPG to the scale of Ashes of Creation is a monumental undertaking, and our highest priority is making this wait worthwhile. Providing the best possible launch experience for our glorious community is of the utmost importance.

First, let me say that if you have not been following the project for long, I encourage you to take a look at some of our updates and YouTube videos from about 2 years ago. After doing that, compare what you saw to the latest 4K footage we've released over the past 2 months. You can absolutely see the immense improvements and changes that have occured over that period of time.

The term “alpha” is a tricky one, and it typically has 2 meanings in gaming. The development meaning for alpha is a point in the process where we are ready to test the fundamental systems in their core form, without polish and without much of the content. Then, there is the external or "marketing" term for alpha. This is typically applied to Eastern-ported MMORPGs, when in fact that is a completed game being localized for a region, and not really indicative of a true development alpha. As you may know by now, game development has many stages - from the initial tech demos to the pre-production and pre-alpha states, then on to the alphas and betas and eventually launch.

I want to make emphatically clear, our alphas and betas are true development alphas and betas, and some have said I am crazy to allow these phases to be seen without an NDA…maybe I am crazy? lol… But I am trusting the community of gamers out there to get a glimpse into the process, and understand the long road ahead for what will eventually be worth the wait. Given time and talent, amazing things can happen, so make sure you help us in communicating that we are in open development which means people get to see the bare bones before the meat. And look, I know people see our 4K footage and say, "This looks better than most released games!", but trust me when I say, you ain't seen nothin’ yet.

With that being said, I am happy to announce the dates for Alpha One testing. 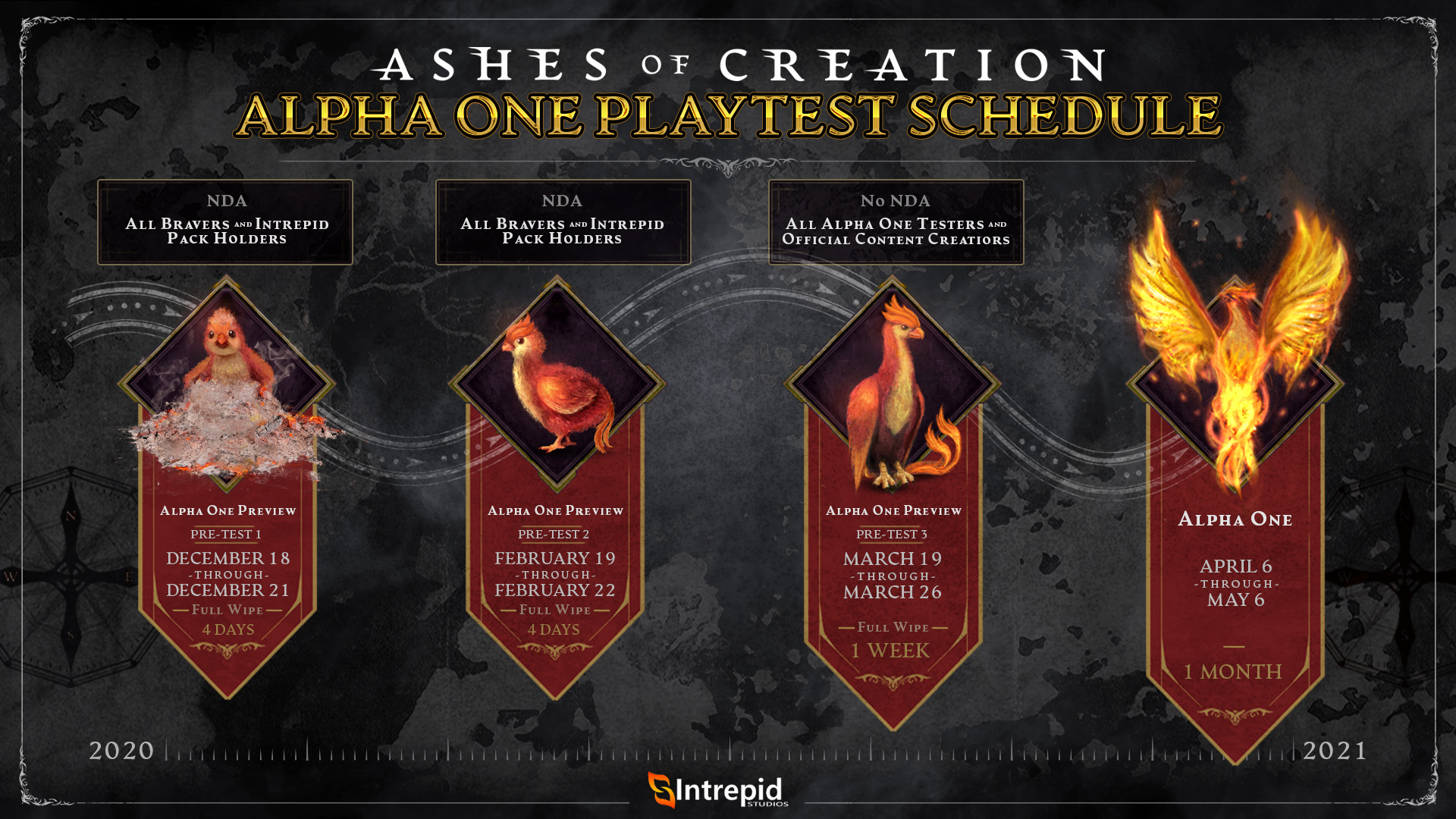 This schedule will include Alpha One testers for a 4-day stress test starting on December 18, 2020. Now this first test will remain under NDA, as there will still likely be some considerable polish and bug fixing necessary. I will of course provide some recorded footage of the event so the community at large can see the testing. The gap between the December test and the February test will provide our team with the time necessary to iterate and fix bugs, then in March we will aim to have a 1-week test stood up in preparation for the final month-long test in April.

Prior to these testing dates, users who have Alpha One access will receive emails with their testing instructions and a known issues list, along with the testing focuses and objectives. As I said, the Alpha One for Ashes of Creation is intended to test the base mechanics of many systems. We leave much room to iterate depending on how the testing data goes. And as usual, it's important to note the UI, tutorial systems, and much of the questing will remain placeholder for Alpha One, and won't really come online until Alpha Two.

We have a very, very busy 4th quarter ahead of us, and the team will be hard at work preparing for the Alpha One test dates. The content push is well underway internally for the Alpha Two and Beta test periods. Plus, much of what Alpha One brings will help us identify areas of reworking that are necessary, and will prompt many community discussions. I cannot stress enough how important it is for you to stay involved and to help us spread the word for Ashes of Creation. We will also be starting our next phase of hiring which you will hear more about in December, and we will be aiming to hire more than the 24 in this last round, so keep those applications coming!

I cannot express how much your support and participation mean to the team and me. Every comment, every tweet, every forum and Discord message is a drip of motivation in a pool of passion and love that our team has for Ashes of Creation and for you, our beloved and glorious community. Please do not forget that each of us spend countless hours and late nights on the game because we want to make you, our fans and fellow MMORPG lovers, proud.

With love and appreciation,

Add to your favorites